Roads on the Road to Repair

After the wettest winter on record and with the wettest September ever recorded following that, Junee Shire Council’s roads – along with all those in the region – have suffered extensively.

The damage ranges from road materials that have been washed away through to failed pavements and springs showing up in the most unexpected locations.

“What we have seen is incredibly high rainfall which has led to high levels of moisture in the roads which in turn has weakened them considerably or washed them away completely in some instances” Council’s Director Engineering Services, Mr Will Barton said.

“Very early on in the event, the Council made representations to the Office of Emergency Management for our LGA to be included in the natural disaster declaration. The message was heard and within a few weeks we had been included in the declaration” stated Mr Barton.

The declaration, for the flooding during the month of September, has opened the door for the Council to lodge a claim for funding to repair the damage that resulted from the event, which it will pursue now that it has a full measure of the damage suffered.

In the meantime, the immediate focus has been on making the roads safe for travel, particularly given the time of year and the upcoming harvest.

Mr Barton went on to say “The priority for the Council is to manage the risk the public is exposed to. Sometimes this means we need to take unpopular measures such as reducing the speed or restricting travel to protect drivers and to a lesser extent to prevent more damage to the road.”

During this time of significant damage, more minor defects may take longer to repair while the Council’s small but dedicated staff attempt to respond to the more than 500 individual instances of damage. Staff are continuing to monitor those defects that can’t be immediately addressed to ensure they don’t worsen to the point where they pose an unacceptable risk.

Luckily for Junee though it has been spared from the scale of the damage seen to the north and west, up and down the Newell Highway.

The Council would like to thank the community for the patience it has exhibited during such a demanding time on its workforce. It is expected that most of the damage to both the State and local road network within the Junee LGA will be completed by February. 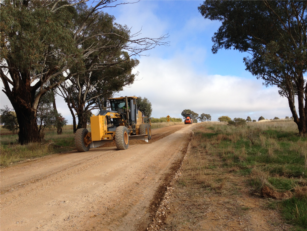